"No Talking or Phones" Warning 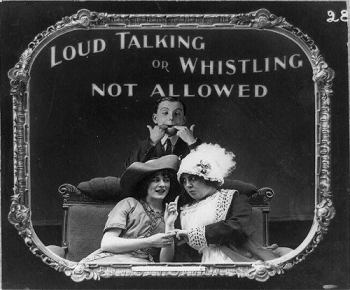 "If you have an emergency, step into the hallway. Otherwise, IT CAN WAIT!"
— Cinemark policy trailer

A form of Paratext used in cinemas and live theatre, reminding audiences to turn off cell phones and refrain from disruptive behaviours during the performance. They range in complexity from a simple oral or written request for silence, to comical demonstrations of innocent audience members being hassled by neighbors' increasingly-extreme misbehavior, to elaborate faux-trailers for nonexistent movies that get interrupted by noise from the audience to show how distracting such racket can be.

The cinematic versions, produced by theater chains, are formally known as "policy trailers". Older versions sometimes mention crying babies rather than cell phones, asking that noisy infants be taken to the lobby. Warnings against smoking note This one is becoming less prevalent in the US as most theaters are non-smoking by law and so it's assumed that they don't need to actually tell people not to. and littering are optional but recommended. And of course, there is the obligatory, "In case of fire, walk quietly to the nearest exit. This notice required by law."note  Although not legally mandated, many U.S. theaters have added a sobering "Report suspicious characters" notice in the wake of the mass theater shooting in Aurora, Colorado. Dire warnings of legal consequences for recording films in progress offer yet another reason to keep your phone switched off. Live theatre also typically warns the audience not to use flash photography, which can be distracting and even dangerous to the performers.

When these rules are not followed by the audience, see Disrupting The Theater.

Theme parks have similar spiels before many rides and shows — keep your arms and legs inside the vehicle at all times, don't put on the 3D glasses until you're seated in the theater, etc. Again, these can be handled in creative, funny ways.

, while Film-Tech Cinema Systems are currently uploading high-quality trailers to their YouTube channel

But what about cigars? Pipes? Hookahs? Weed? That Acme Gazette commercial that turned into a "No Smoking" spiel only mentions cigarettes...

But what about cigars? Pipes? Hookahs? Weed? That Acme Gazette commercial that turned into a "No Smoking" spiel only mentions cigarettes...