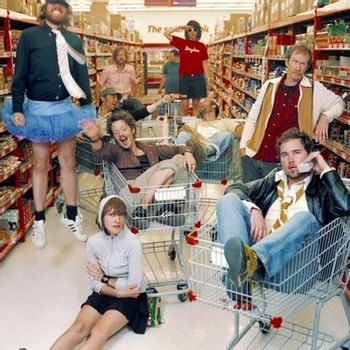 This isn't even all of the members!
Advertisement:

Broken Social Scene is a Canadian indie rock group which formed in 1999 in Toronto, Ontario, Canada. Known as a "musical collective", BSS is made up of numerous members who also perform in other groups or have solo careers of their own. Some of the group's members include Leslie Feist, Emily Haines and James Shaw from Metric, a couple members of the post-rock band Do Make Say Think, indie pop band Stars and rock group The Weakerthans, among others. The band’s core members are Kevin Drew and Brendan Canning, who recorded and released the band’s first album, Feel Good Lost, in 2001.

At any given time, as few as six or as many as nineteen members will be involved with the group. Members often come and go to pursue other projects after they finish a tour or album. The group's sound could be considered a combination of all of its members' respective musical projects, and is characterized by a very large number of sounds, grand orchestrations featuring guitars, horns, woodwinds, and violins, unusual song structures, and an experimental and sometimes chaotic production style.

BSS have released several albums, which have all received significant critical and commercial acclaim. The band’s second album, You Forgot It in People (2002), landed on many music critics’ year-end Best-Of lists, and won the 2003 Alternative Album of the Year Juno Award. The band's most recent album is Forgiveness Rock Record. The band is also the subject of a 2010 documentary film called This Movie Is Broken, which chronicled the band's impromptu performance at a Toronto venue after a prior show was canceled with no warning. The free performance that is detailed in the film (held at the Toronto Harbourfront Centre) included appearances by nearly all past contributors.

The band has also composed the soundtracks for, and contributed music to, the following films:

Some tropes embodied by the band and their work include: