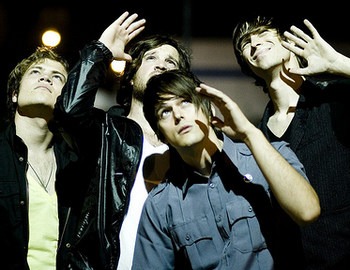 Dallon Weekes (blue shirt) and the other members of the band
The Brobecks is an indie band created by Dallon Weekes (who now is the bassist of Panic! at the Disco and I Don't Know How But They Found Me) and photographer/producer Matt Glass. They have released several albums and other music (which is available on their bandcamp http://thebrobecks.bandcamp.com)

and one of their albums, 'Violent Things' is available on iTunes. Dallon is the front man of the band and the only member who has be involved with all of the band's releases. Other noteworthy band members include original guitarist and co-frontman Mike Gross, who appeared on all of the band's first three albums, as well as keyboardist Bryan Szymanski, who, along with Dallon, Mike, and Matt, formed the lineup featured on the band's first two albums.
Advertisement:

The band has been inactive since 2013 due to Dallon's commitments to both Panic! and IDKHOW, the latter of which continues to perform Brobecks songs in concert.

Dallon's DeviantArt can be found here

Tropes in the band members:

Tropes in the band's music: