Music / I Don't Know How But They Found Me 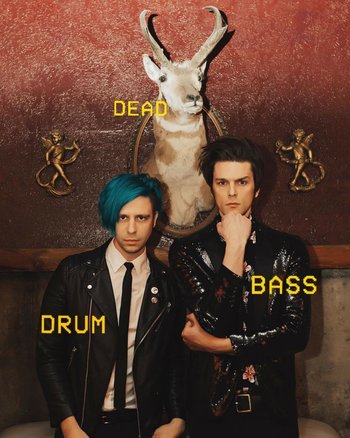 Seaman (left), Weekes (right), and a deceased pronghorn (centre).
Nobody likes the opening band
Their set time's far too early
And I've never heard of them
And chances are, they won't go far
Career is sure to end
'Cause no one likes an opening band
—"Nobody Likes The Opening Band"
Advertisement:

I Don't Know How But They Found Me (often shortened to IDKHow or iDKHOW) is a two-piece band featuring bassist and vocalist Dallon Weekes (formerly of Panic! at the Disco and The Brobecks) and drummer Ryan Seaman (formerly of Falling in Reverse, also played for The Brobecks). It was created in secret in 2016, and both Weekes and Seaman denied all knowledge of the band for several months after their first show. IDKHow is a concept band, centred around the idea of "a band out of time" originally from the The '60s. They never got their big break, and were entirely forgotten about until a box of old cassette tapes was re-discovered in the modern day, leaving a trail of sinister mysteries behind them.

Three singles were released prior to the band signing to a label: "Modern Day Cain"

, and "Nobody Likes The Opening Band"

, re-released "Choke", and made it public knowledge that the band had been signed to Fearless Records.

We invite you to follow along to these examples: