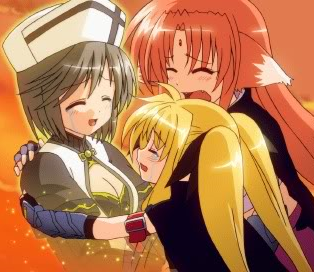 "He'll be fading away into little sparks any second now...because surely, without his head, he is vanquished!"
— Rin Tohsaka, Fate/stay night fan comic by veloxiraptor

Alas! Bob has been fatally wounded. As he lies dying, motes of light begin to rise off his body, slowly at first, but increasing in speed. Just before he fully disappears, he makes one last optimistic comment, and his body bursts into a thousand tiny pinpricks of light. This saves his friends the inconvenience of burying him.

Sometimes happens to holy characters, or is used to show that they Ascended To A Higher Plane of Existence, or ghosts when they Go into the Light. It's also popular for sentient computer programs to go this way after being 'deleted.' Such deaths tend to be followed up with celestial faces looking down, having Died Happily Ever After.

Of course, motes aren't the only way it works. Swarms of insects, flower petals/leaves, and the like (often glowing) are also commonly used.

Related to Everything Fades and Fading Away. The major difference is that Everything Fades is used by video games so that the console no longer has to spend memory tracking an increasing number of fallen enemies, while this is understood as happening in the "real world" that the characters explicitly experience, and that Fading Away is both less showy and is explicitly the cause of death, rather than something happening as a side-effect of a character dying for some other reason.

For a less dramatic way of disposing of the dead, see No Body Left Behind. For the version of this trope that implies a much worse fate, see Technicolor Death. Not to be confused with Suicide by Sunlight, where vampires end their unlives by walking into the dawn.

The Elements of Harmony blast Twilight away.

The Elements of Harmony blast Twilight away.