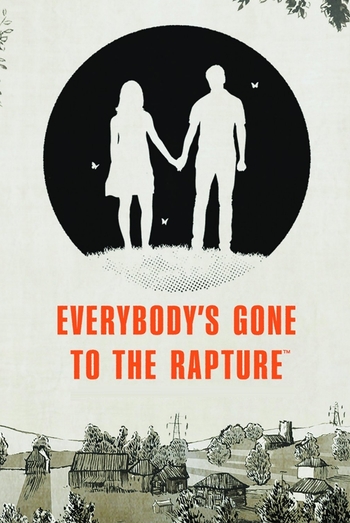 "This is Doctor Katherine Collins. I don't know if anyone will ever hear this. It's over. I'm the only one left."
— Opening lines of the game
Advertisement:

Everybody's Gone to the Rapture is a 2015 Post Apocalyptic Environmental Narrative Game developed by The Chinese Room (developers of Dear Esther and Amnesia: A Machine for Pigs) and released for the PlayStation 4 (ported to PC in 2016). It focuses on an unknown survivor of an apocalyptic event in a (fictional) small English village in Shropshire, who appears to be the only person left in the town. Using audio logs, tape recorders, and images granted by floating balls of light, the character, and by extension, the player, try to piece together just what happened to the town.

The title of the game, however, means it doesn't exactly require a MENSA membership to guess.