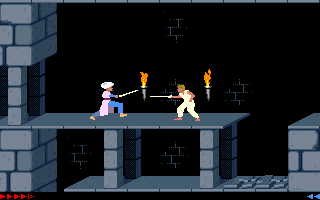 Locked in her room high in the palace tower, the Princess rests all her hopes on you. For when the last sands drain from the hourglass, her choice can bring only a throne for the Grand Vizier...a new reign of terror for his long-suffering subjects...and death for the brave youth who might have been...
Prince of Persia.

The first game in the Prince of Persia franchise, originally created by Jordan Mechner for the Apple IIe and released by Brøderbund Software in 1989.

Prince of Persia follows the story of a traveller from a faraway land who had journeyed to medieval Persia, at a time when the kingdom's ruling Sultan was waging war in a distant land, and his tyrannical Grand Vizier, Jaffar, had seized power. The traveller meets and becomes the love interest of the Sultan's daughter, the Princess of Persia. Not content with this, Jaffar has the traveller locked in the palace dungeons and imprisons the Princess in her room at the top of it, giving her an ultimatum: marry him within the hour, or die. The traveller must thus Race Against the Clock ticking away at the bottom of the screen, and run, jump, climb, and Flynn his way through the palace's Malevolent Architecture, filled with traps and patrolled by guards, to escape from the dungeons, defeat Jaffar, and Save the Princess.

A direct sequel, Prince of Persia 2: The Shadow and the Flame, was released in 1993.

This game was ported to more systems than any other game in the Prince of Persia franchise. Versions of the game were released for just about anything that was Turing-complete, including the Atari ST, Amiga, Amstrad CPC, Sam Coupé, IBM Personal Computer, PC-98, Sharp X68000, FM Towns, Apple Macintosh, Nintendo Entertainment System, Super Nintendo Entertainment System, Sega Master System, Sega Genesis, Sega CD, TurboGrafx-CD, Game Boy, Game Gear and Game Boy Color. This is not counting the unofficial ports to the ZX Spectrum, Commodore 64 and Atari 130 XE, the Video Game Remake Prince of Persia Classic, or the numerous appearances of the game as an Embedded Precursor in later Prince of Persia games.