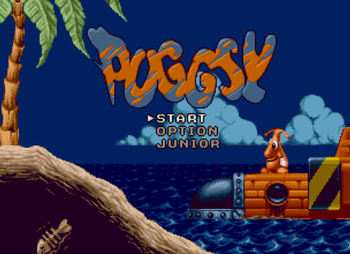 Puggsy is a puzzle/adventure game released in 1993, published by Psygnosis and developed by Traveller's Tales. It was released for the Sega Mega Drive/Genesis, Sega CD and Amiga. The game follows the story of the titular orange space-hopper alien who crashed his ship on The Planet, but the ship was stolen by the native raccoons.
Advertisement:

Although the story is made of Excuse Plot at best, Puggsy is notable for using a clever physics engine to control the properties of objects - a feature that would be rarely seen until the success of Half-Life 2.