Literature / Out of the Dark 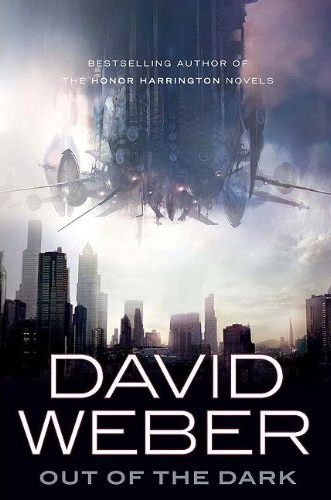 Expanded from a short story of David Weber that first appeared in George R. R. Martin and Gardner Dozois's anthology Warriors (2010), Out of the Dark, released the same year, is a novel known for its unusual take on military science fiction.
Advertisement:

In the very near future, Earth has been targeted for colonization by a galactic empire known as the Hegemony. Deemed "lunatic local sentients" by a survey team that witnessed King Henry V and his troops slaughtering the French at Agincourt, humankind has essentially been written off as bloodthirsty, backwater barbarians that no one will particularly miss. It's The End of the World as We Know It. Technologically superior, carnivorous, canine-analog aliens have invaded Earth with the intention of killing most of us and enslaving the rest. Things don't go according to plan.

If you don't want to spoil the ending, don't scroll down to the Index list at the bottom of this page, or even glance at the review page. The sequel, called Into the Light, was released on January 12th, 2021, after more than a decade in Development Hell.

Alternative Title(s): Into The Light