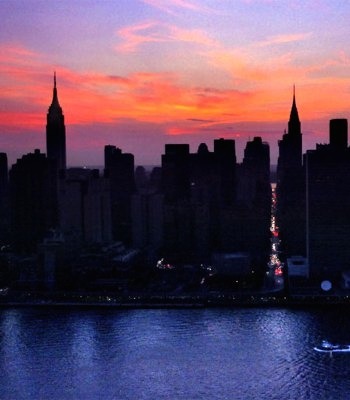 The City That Never Sleeps has no nightlight tonight.
Dean: I thought you were supposed to be impressive. All you do is black out the room?
Archangel Raphael: And the Eastern Seaboard. [cue dramatic thunder]
— Supernatural

A sudden blackout cuts the electricity to an entire city, state, country, etc.

This is usually caused by a machine that sucks way too much energy. Sometimes the power is adequate and the machine works, other times it begins a quest for the heroes to find something that is powerful enough. Alternately, it could be caused by a Solar Flare Disaster, an Electromagnetic Pulse, or perhaps an Alien Invasion.

Often illustrated by a distance shot of an entire city at night (blackouts never start during the day on TV), with large rectangular sections of the city going out one-by-one, about a second apart. If it's a really big one, there also tends to be a satellite view of a continent. And then maybe the other continents.

In Real Life, such incidents are usually caused by natural disasters or large-scale accidents. Household electrical systems (and even small commercial systems) simply do not have the ability to drain enough power from the utilities to cause a system-wide deficit. Assuming that safety features such as fuses and circuit breakers failed to work (or were bypassed), the excessive electrical current would still make the building's wiring catch fire long before the utility would see any measurable drop in voltage.

See Power Outage Plot for how characters deal with blackouts.

Markov accidentally redirects all of the power in Agreste Mansion to the music system; including the power going to Emilie's life support.

Markov accidentally redirects all of the power in Agreste Mansion to the music system; including the power going to Emilie's life support.