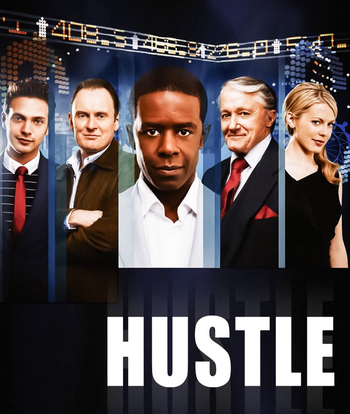 The Con is On.
The con is on...
Advertisement:

A British dramedy show (2004-2012) following a group of con artists who specialize in the long con and only con those who deserve it. Inspired by the likes of con films like The Sting (it's mentioned more than once and almost every con that appeared in that film ends up being played in Hustle at some point). The team takes a modern-day Robin Hood approach of finding corrupt people and corporations who have committed crimes or wronged someone, and the crew go to restore justice as they see fit. It proved such a hit, that the second series was commissioned only four episodes into its six-episode run.

The show itself often winks at the audience or confides in their ideology or plans, and is also equally unafraid to con the audience, with the characters having back-up plans with every action they take, and only revealing a crucial part(s) of the con until the very end; seemingly random and unrelated moments throughout the episode are revealed to be vitally important. The one thing you can count on with this show is that if you think you know how a con works in a given episode, then you don't. The show has some kind of reveal at least Once an Episode to wrap up the events into one narrative.

The fourth series saw a change in the cast; Mickey was busy in Australia "selling the Sydney Opera House", leaving Danny as the (far-more chaotic and improvisational) leader. The fifth man was Billy, a younger and naïve short con artist who idolised Danny. This changed again for the fifth series when Mickey returns, but with Danny and Stacie in America, Albert in prison, and Billy... unmentioned, Mickey and Ash put together a new crew, this time with brother and sister con artists Emma and Sean Kennedy.

The show ended in 2012 with eight series under its belt. It also spawned a Companion Show called The Real Hustle; with the premise of showing off cons people pull off in real life so viewers don't get fooled when out and about.

It has an across the pond counterpart in Leverage, though save for general concept, and at least one prominent guest star appearing on both shows, the two are unrelated.

Not to be confused with the 1975 neo-noir film starring Burt Reynolds, the ESPN original miniseries about Pete "Charlie Hustle" Rose, or the Japanese comedy-oriented wrestling promotion.