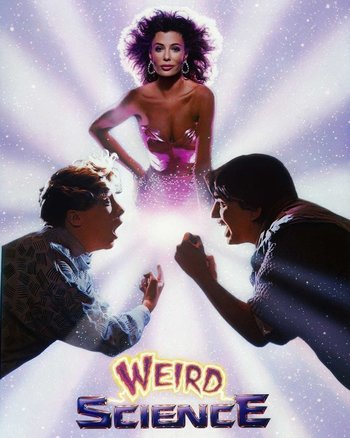 A 1985 Speculative Fiction comedy written and directed by John Hughes, starring Brat Packer Anthony Michael Hall and supermodel Kelly LeBrock, and featuring Robert Downey Jr. and Bill Paxton. A typical-for-its-time (if somewhat tame) Wish-Fulfillment teen-sex comedy with a Sci-Fi twist: When a pair of Nerds can't get girls on their own, they decide to build themselves the perfect woman in an effort to become popular.

Gary (Hall) and Wyatt (Ilan Mitchell-Smith) are typical Nerds (if unattractive only by Hughes' standards) who are bullied at school. At home, Wyatt's Jerk Jock older brother Chet (Paxton) makes their lives just as uncomfortable. The guys are desperate for female attention. Unable to work up the nerve to actually talk to real girls, the pair use Wyatt's Magical Computer to simulate a woman. However, a hack into a government mainframe and a freak thunderstorm all come together and bring the woman simulation to real life.

This woman (LeBrock), whom the boys name "Lisa", turns out to be a Magical Girl, able to create "anything [she] want[s]". What she wants, in the end, is to help the boys get girlfriends. To this end she takes them to a blues bar to befriend the clientele (to break them out of their shells); teaches them to kiss (at least, teaches Wyatt); and throws a big raving party at Wyatt's house (to show them that they can be popular, or at least liked). When, however, the boys hide from their own party, Lisa creates a distraction: a home invasion by a biker gang to threaten the guys' dream girls, forcing them to come to the rescue and scare the thugs off. She also stands up to Chet, showing him what it's like to be on the receiving end of a bully's attention.

Adapted into a television series in the early 90s. A Remake was announced in 2013 but has apparently landed in Development Hell.