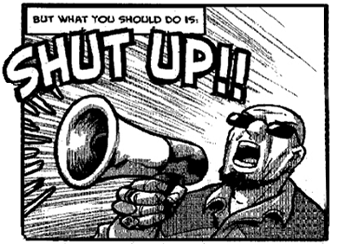 The megaphone is optional.
Miss Bennet: I confess, I did not know.
Miss Bingley: In faith, what would appear to be the summation of all that you "do not know", Miss Bennet, would make for quite th—
Mr. Darcy: Oh, Caroline, would you please SHUT THE FUCK UP!?!
— Pride and Prejudice sketch, That Mitchell and Webb Look
Advertisement:

When you don't have anything smarter to say. Basically, someone screams "Shut up!" at another person (or group of people) when annoyed, upset, or pissed off, and occasionally followed up by trying to attack said someone. Could also be uttered when trying to put a Superpowered Evil Side in its place. Variations include: "SHUT THE HELL/FUCK UP!", "QUIET!", "SHUT YOUR (DAMN/FUCKING) MOUTH/FACE!", "SILENCE!", "ENOUGH!", etc. The Japanese version, very common, is "URUSAI!", literally "noisy!" Occasionally applied literally to Shut Up, Hannibal! or Shut Up, Kirk!. "Shut Up!" Gunshot is this when it's done with firearms.