Film / Pirates of the Caribbean: Dead Men Tell No Tales 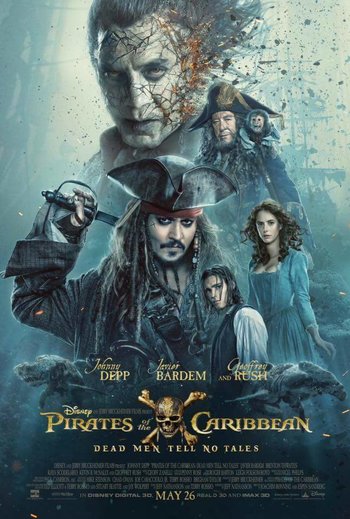 The final adventure begins.
"Find Sparrow for me and relay a message from Capitán Salazar, and tell him [Beat] Death will come straight for him! Will you say that to him, please?"
— Capitán Salazar
Advertisement:

Dead Men Tell No Talesnote Also known in some countries as Salazar's Revenge is the fifth movie in the Pirates of the Caribbean franchise, released on May 26, 2017.

Captain Jack Sparrow is pursued by the ghost of a pirate hunter, Captain Armando Salazar, who along with his crew that turned into ghosts, has escaped from the Devil's Triangle where Sparrow once led them to their death. In order to defeat Salazar, Jack sets out to seek the Trident of Poseidon, a powerful artifact that grants its possessor total control over the seas. Salazar also wants to get his hands on the Trident, to kill every pirate at sea.

Pirates of the Caribbean: Dead Men Tell No Tales contains examples of:

When I hear that trumpet sound
I'm gonna rise right out of the ground
Ain't no grave
Can hold my body down...
Feedback