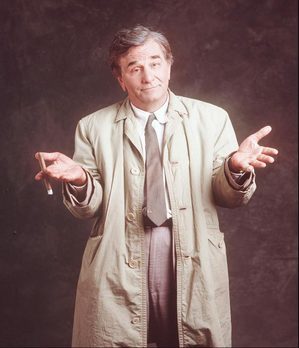 "Goodnight... you died as you lived: in a dumb Inspector Gadget coat."
— Chris Sims, Comics Alliance

recap of the Smallville finale
Advertisement:

Extremely associated with police detectives, FBI, and inspectors. In fact, association with the latter is so strong, you will have trouble finding a character named "inspector" without a Not So Badass Longcoat of his own.

See Badass Longcoat for the inverse of this trope, and Conspicuous Trenchcoat for when someone uses a longcoat to conceal themselves, but the disguise has no effect on the audience (or appears to be hiding some Sexy Coat Flashing).