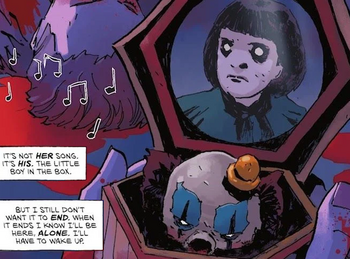 "The music box is broken, or is it? It starts to play, and a haunting tune fills the air..."
— Spike Spiegel, Cowboy Bebop
Advertisement:

A music box tune that sounds a bit off. It may have an overly cheery or depressing sound to it or the tune just seems to be completely out of place. Either way, the effect is just creepy, and there is something not quite right about it. Something not quite right at all. Shows up in horror movies and TV shows occasionally. Due to real dolls often having music boxes, this trope is often paired with the Creepy Doll.

Compare Rousing Lullaby, a lullaby that is not meant to be relaxing, along with Ironic Nursery Tune, Creepy Circus Music, and Creepy Children Singing, where creepy songs and nursery rhymes are played in the background to add tension and fear to a scene. Similar to the Uncanny Valley, in that the tiny bit that's "off" is what makes it feel very wrong. For Doom the Bell Tolls and Xylophones for Walking Bones are about similar instruments used for creepiness, but aren't necessarily associated with lullabies.

For a tune which has the general sound of a music box but isn't actually played on one, see Music Box Intervals. Contrast Nostalgic Music Box, which is meant to be sad instead of scary.

The closing credits for the episode "All In" feature Amphibia's moon slowly descending towards the planet with a broken version of Anne's Theme playing.

The closing credits for the episode "All In" feature Amphibia's moon slowly descending towards the planet with a broken version of Anne's Theme playing.