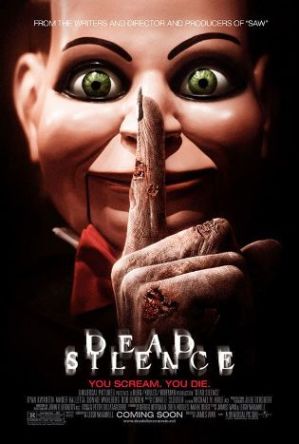 Beware the stare of Mary Shaw.
She had no children, only dolls.
And if you see her in your dreams,
make sure you never, ever scream,
or she'll rip your tongue out at the seam.
Dead Silence is a 2007 horror movie from the makers of the Saw movie series. It has less Gorn, but the chilling horror that this film provides covers the loss.
Advertisement:

The movie tells the story of Jamie Ashen (Ryan Kwanten), who receives an anonymous package containing a ventriloquist doll named Billy. Shortly after, he goes to run a quick errand, leaving his wife (Laura Regan) alone in the house with the doll. When he returns, he finds his wife dead and mutilated with her tongue torn out. Police suspect Jamie as her murderer. When he journeys to his hometown of Raven's Fair (taking the doll with him) to bury his wife and to find some answers, they send Detective Jim Lipton (Donnie Wahlberg) to spy on him.

Jamie arrives to his home where he finds his aging father, Edward (Bob Gunton), has remarried to a young blonde named Ella (Amber Valleta). She reminds him of an old poem that told about Mary Shaw, a murdered ventriloquist who seeks revenge, killing and ripping out the tongues of anyone who screams upon seeing her ghost. After getting more disturbing information and warnings, Jamie decides to bury the doll, hoping this will end his torture.

To say that things go downhill from there doesn't even begin to cover it...

Warning: Some unmarked spoilers below.

Mary Shaw: To silence those who silenced me.