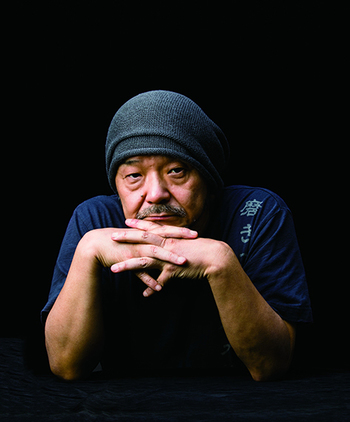 "Oshii is probably the only director that loves dogs. He thinks he's a dog himself."
—Haruko Haruhara
Advertisement:

Even though he is known today for his films with philosophical dialogue and labyrinthine plots, Oshii first rose to prominence at Studio Pierrot directing (and occasionally storyboarding and writing for) the zany anime comedy TV show Urusei Yatsura. He also got his start directing films with UY, directing the first movie, Only You (which supposedly suffered from Executive Meddling) in 1983.

‘83 was in fact a very busy year for Oshii. In addition to directing a television series and making his first motion picture, he also co-wrote and directed Dallos, the first ever OVA. The next year he completed Beautiful Dreamer, the second Urusei Yatsura film. Considered to be the first film to contain Oshii's trademark direction techniques and stylings, this surreal movie also reportedly upset creator Rumiko Takahashi and led to Oshii leaving the franchise.

After a few years of making some highly experimental and artistic anime including Angel's Egg, Oshii directed his first live-action film, The Red Spectacles, in 1987. This movie was the first in his dystopian Kerberos Saga, which also includes his 1991 live-action film StrayDog: Kerberos Panzer Cops as well as the anime film Jin-Roh: The Wolf Brigade (which he wrote but did not direct), and numerous manga and novels.

In 1988, Oshii returned to the mainstream when he joined anime super-group “HEADGEAR” (which included colleagues from his Urusei Yatsura days) and produced the OVA Patlabor. He also directed Patlabor: The Movie, the Patlabor… well, movie. This was followed up in 1993 with Patlabor 2, a somber film that deals with terrorism, the nature of peace vs. war, the complacency of a nation's citizens, Japan's place in the modern world, and other fluffy topics. During this time he also wrote some episodes for the Patlabor TV and second OVA series.

The biggest hit of Oshii’s career though came in 1995, with the release of his adaptation of Masamune Shirow’s Ghost in the Shell. This highly influential cyberpunk movie was technically groundbreaking, using a subtle blend of traditional cel art and computer graphics to great effect. Ghost in the Shell, which was heavily influenced by Ridley Scott’s Blade Runner, would go on in turn to inspire many films afterward, including The Matrix. It was also one of a number of gateway anime that helped the medium gain popularity in the West.

Mamoru Oshii continues to write and direct to this day. In addition to directing Innocence, the sequel to his biggest hit Ghost in the Shell, he directed the Polish Sci-Fi film Avalon and the Navel-Gazing Air Combat yarn The Sky Crawlers, among many, many others.