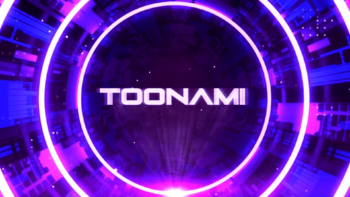 What's up, Toonami Faithful? Time to describe Toonami here. If you're new to the show, welcome. If you've been down from the beginning, all I can say is: Thanks. Time to push the button.

Toonami is an influential programming block that was previously broadcasted on Cartoon Network, consisting primarily of Western action-adventure cartoons and anime, airing on weekday afternoons from 1997 to 2004, and later Saturday nights from 2004 to 2008 and beginning again in 2012 on Adult Swim.

The block features incredibly high production values for its commercial bumpers, advertisements, and ARG campaigns, which included high-end 3D graphics, a soundtrack consisting of then-uncharacteristic (for a children's block) drum-and-bass and ambient music, and a consistent setting and narrative. Toonami had a hand in uncancelling several syndicated series (Dragon Ball Z, ReBoot, and Sailor Moon), and it premiered several series on its own, both anime (Gundam Wing, Outlaw Star, all three of the original Tenchi Muyo! series) and Western animation (He-Man and the Masters of the Universe (2002) and Megas XLR). In regards to anime, fans and historians both credit Toonami for single-handedly ushering in the mainstream Japanophilia boom of the early-to-mid 2000s.

Toonami began life as a spinoff of Space Ghost Coast to Coast, with Moltar broadcasting action cartoons from the Ghost Planet in a similar manner to older Cartoon Network action blocks like "Super Adventures" and "Afternoon Adventures" (its direct predecessor). Cartoon Network later Retooled the block with an original host character, TOM (standing for Toonami Operations Module), broadcasting from the Cool Starship Absolution (with Spaceship Girl SARA joining the cast later). The network also created story-based events and online games associated with TOM and the Absolution (the first of those events, The Intruder, resulted in the upgrade of TOM to TOM II). The tenth anniversary of the block brought yet another retool, relocating the Framing Device to a jungle planet with a new incarnation of TOM and several other new Robot Buddies; fans widely think of this version's cast as largely inferior to the previous versions of TOM and Sara.

Cartoon Network exported Toonami to other nations' versions of the network; it even became an entire network thanks to a revamp of the spinoff channel CNX (before degrading into "CN Too"). The Kids' WB! weekday afternoon block also tried to adopt Toonami's brand for about a year from 2001-2002, but the programming didn't fit the block's image, and the Toonami branding soon went away. On December 1, 2012, Turner launched another Toonami channel in Asia, the success of which has led to yet another Toonami channel being created in Thailand

Fans of Toonami recognize the block — or, more accurately, Toonami's "Midnight Run" — as the Spiritual Predecessor of Adult Swim. Several anime series that aired on Toonami ended up airing on [as] during the latter block's first year.

Cartoon Network eventually cancelled Toonami due to flagging ratings—a direct result of moving the block to Saturdays only and filling it with reruns, then-flagship show Naruto working through the now-infamous pre-Shippuden Filler Arc (ironically, Toonami was mere weeks away from the last filler episode at the time), and the higher-ups' need to retool the network itself. The final edition of Toonami aired on September 20, 2008 (surprising fans who had no knowledge the network had cancelled Toonami), and the "Toonami Jetstream" streaming video site subsequently went offline in January of 2009.

Toonami was shut down... for a while, at least.

On April Fools' Day 2012, Adult Swim "revived" Toonami for one night; while it mainly reused clips from the past — and showed episodes of classic Toonami shows — it also featured new lines recorded, a special Bleach bumper and an all-new review of Mass Effect 3.note Click this link to watch everything that happened, sans the shows.

At its 2012 upfront on May 16th, [as] officially announced the return of Toonami after the resounding success of the April Fools special; the block would rise again on May 26th, 2012, with a mix of old and new programming.

The new Toonami started off on a limited budget, with a lineup made up of anime left from the [as] action block (such as Bleach, Cowboy Bebop and so on) and cheaper new anime (like Deadman Wonderland and Casshern Sins), before expanding to a full six hours with returning CN original favorites Sym-Bionic Titan and ThunderCats (2011).

As of November 4, 2012, during the Daylight Savings hour, Toonami confirmed that TOM 4.0 is still around. 3.5 and 4.0 are two different robots altogether. TOM 3.5 was seen chatting with TOM 4.0, asking how the latter was enjoying his extra hour. TOM 3.5 says at the end that they'll have to explain 4.0's story someday sooner or later. On March 10th, a TOM 5.0 was confirmed to be coming in April.

With a online comic that will tie him and all of the TOMs together.

TOM 5.0 and the new Absolution officially debuted on April 27th, and brought SARA back as well.

TOM says it's been a long time since they last talked.

Once again, Toonami featured original stories and tie-in content, which saw the Absolution blown up with the return of the Intruder, the fall of the maligned TOM 4.0 and company, and had TOM 5.0 battered and bruised until being outright destroyed in 2019, along with a couple Clyde robots. Through SARA's help, he rose again as the current TOM 6.0, but the Vindication, the ship they had found on a dying world, was turned over to a batch of 5.0 series of robots, one of which was given sentience as their leader, TOM Jr. For a time, TOM and SARA used the broadcasting equipment of a mechanical forge, where they remained marooned but functional...until 2022 when the Absolution Mk. XIV arrived from the future and the two stepped on board. Even after all of the crazy things that happened to them, they're still doing the same video game reviews and motivational speech montages. Moltar also officially retired from hosting duties due to the death of his voice actor.

for the [adult swim] block, which is used for communicating with the Toonami staff for things such as Q&As.

Toonami currently plays or rotates the following series as of July 2nd, 2022: note All times Eastern/Pacific.

Every so often, the block will do special event story arc that showcases TOM in a dire situation. The name comes from the fact that even though the shows are still playing, the event is still happening offscreen in the bumpers, so TOM and Sara wouldn't be able to greet the viewers until the threat is resolved. In the heyday of the block, there would also be some games and comics online that would tie into the event. To learn more about them, check their individual pages.
Click To View
To see an index of past Toonami series, check out the Recap page.