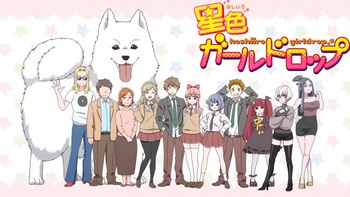 Just your normal every day idol anime.
Daichi Taira and Sosogu Hoshifuri were as close as anyone could get as children. Together, they made a promise that when they got older, they would live together and get married. But Sosogu moved far away one day, and he never saw her again.
Advertisement:

A couple of years later, Daichi is a regular teen living a humdrum life. Not even his parents leaving for an overseas trip can change that. Just before the pair can get out the door, his mother gives him a bit of advice among the usual warnings: "Take care of Sosogu". Unfortunately, he cannot exactly remember who or what Sosogu is—pretty bad, since she just moved into the house, right within earshot of him saying that. A lot of things have changed since their childhood, especially with Sosogu becoming the lead singer of girl group sensation Drop Stars and gaining a whole new group of friends. Despite this, she is determined to make him remember that promise they made all those years ago, even if he has to get roped into her new career as her manager to do it. Along with the aloof and possessive Shinobu Tsukino and the older sister-like beauty Korona Yuuhi, Daichi's life is about to take a whirlwind turn for both the romantic and the musical…

…If only Popuko didn’t tear through the series first.

Originally written as a oneshot after Pop Team Epic's first season of strips, Hoshiiro Girldrop (星色ガールドロップ) is Bkub Okawa's send-up to idols, romcoms, and especially idol-based romcoms, packed with as many tropes as he could possibly fit in. The series was made a regular gag in Pop Team Epic announcements after its publishing. It even got the honor of being the gag for the series' anime announcement on April Fools 2017, complete with animated trailer and theme song done by none other than Kamikaze Douga. Despite its joke status in the latter series, it would go on to be sort of expanded on as a regular segment, with an animated version of the original oneshot serving as the first Cold Opening and later functioning as the show's On the Next segments. In February 2018, it was fully turned into an Anthology Comic by Bkub and other artists, letting the audience for the first time see what the manga (probably) would have been like.

Tropes about the Anthology:

Fall in love with us again next time!