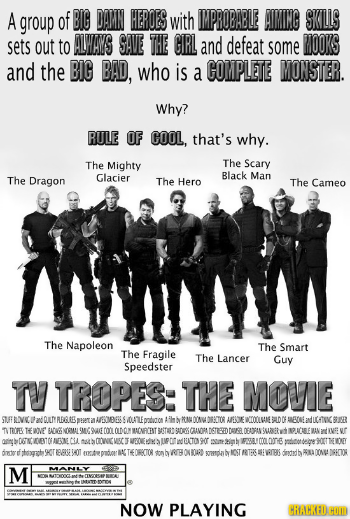 You know you want to watch it!
(Source)

And for the curious... There are 50 tropes (and 2 Trivia) in that poster: Absurdly Sharp Blade, Always Save the Girl, Awesome McCoolname, Awesomeness Is Volatile, Awesome Music, Badass Normal, Bald Head of Toughness, Big Bad, Big Damn Heroes, The Cameo, Censorship Bureau, Cluster F-Bomb, Complete Monster, Convenient Enemy Base, Cool Old Guy, Damsel in Distress, Deadpan Snarker, The Dragon, Fragile Speedster, Guilty Pleasures, Hands Off My Fluffy!, The Hero, Implacable Man, Impossibly Cool Clothes, Improbable Aiming Skills, Jump Cut, Knife Nut, The Lancer, Lightning Bruiser, Locking MacGyver in the Store Cupboard, Magnificent Bastard, Media Watchdogs, Mighty Glacier, Mooks, Most Writers Are Writers, The Movie, The Napoleon, Prima Donna Director, Rated M for Manly, Reaction Shot, Rule of Cool, Scary Black Man, Sexual Karma, Shoot the Money, Shot/Reverse Shot, The Smart Guy, Smug Snake, Stuff Blowing Up, Unrated Edition, Wag the Director, and Writer on Board.
Advertisement:
"Yor is both everything and nothing that movies have ever been. It rips off so many cinematic cliches that it actually passes infinity, curves back around and then comes back to become something wholly original again! It is, in a word, transcendent.
— Noah "The Spoony One" Antwiler, on Yor: The Hunter from the Future

While some works love Playing with a Trope and others are so lacking in self-awareness that they play everything painfully straight,note Say it with us now, "cliii-chééé" there are some gems that take delight in their tropes and then turn them Up to Eleven. This is especially common in Reconstructions, where all the narrative conventions that made the genre fun are present in full (and generally goofy) force, or parody works, usually of the affectionate variety, where the whole point is to laugh at as many tropes as humanly possible.

So, the grizzled veteran will jump on a grenade. The Kid Hero will find that last bit of Heroic Willpower to fight off The Virus and vanquish the newly freed Big Bad once and for all. The seven Runes of Borax will be gathered when the planets are aligned to free the Ultimate Evil who will inevitably turn on the evil overlord.

In short, works that are deemed Troperiffic apologize for absolutely nothing and just have fun with every convention or tried idea and taking it to places never thought possible. MST3K Mantra will sometimes be a requirement to enjoy the work because, without it, Troperiffic works can come off as confusing. Then again, a good Troperiffic work will be fairly obvious about it in some way.

Note that one person's Troperiffic is another person's Cliché Storm, although most Troperiffic works have a certain level of Lampshade Hanging, sarcasm, or underlying love for the genre the work exists in. That, and Rule of Cool in copious amounts.

Compare Serial Escalation, Exaggerated Trope. A work that is verifiably like this can be said to be Trope Overdosed. See also ReferencedBy.TV Tropes for actual references towards the site. Not to be confused with Stripperiffic.