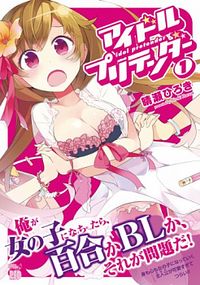 My name is Eita Chinami.
I am a man among men.
...Or at least I was supposed to be.
Advertisement:

Eita Chinami is a high-school delinquent who wants to become the most badass guy in school to win the chance to confess his love to school idol Yuika Kitano. He tries to achieve that by beating the crap out of every tough guy in and out of school. However, when he catches a cold and ends up taking the wrong pills, he wakes up the next day... as a girl. And an incredibly cute one, at that.

Now the only cure for his/her little predicament is to take the pills again. The catch — (s)he is 300 million yen short of a jar of it! With his/her metrosexual best friend Keisuke Oguri, Chinami vows to return into the true man (s)he always was... by having to take up an idol job — and to his/her surprise, Yuika is also an aspiring idol.

Idol Pretender is a Seinen manga series written and illustrated by Hiroki Haruse.