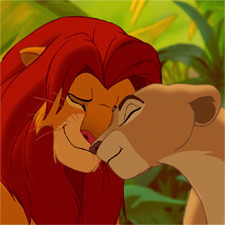 To bed, kids! This part is for the grown-ups.
"Lip-mashing is an oddity in the wild kingdom."
— Milo Bloom, Bloom County
Advertisement:

There's a problem that arises in stories featuring reasonably anthropomorphic animals, both of the plain old talking and funny varieties. Many writers want to include romantic plots or subplots in these works. For human characters, a kiss often serves as the closure to a Will They or Won't They? arc.

The problem arises from the fact that, unless you're writing monkeys and apes (or fish, we suppose, but there are usually No Cartoon Fish), most animals just don't have the facial structure required for a human-type, lip-to-lip kiss. So having animals "kiss" like humans isn't necessarily plausible. So what do writers do?

Well, usually one of two things: