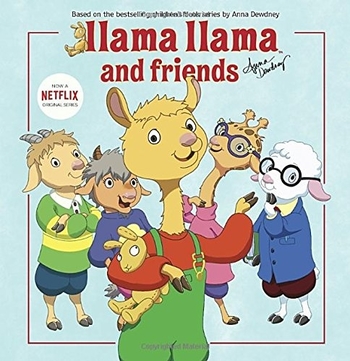 Llama Llama is a series of children's picture books written and illustrated by Anna Dewdney. The books feature the adventures of the title character, a young Llama, in situtations such as wanting his Mama Llama late at night, going to school for the first time, facing off against a bully and getting overwhelmed during the holidays. A character from the series, his best friend Nelly Gnu, appeared in a spin-off book titled Nelly Gnu and Daddy Too.

Though Dewdney passed away in 2016, she had left behind a large body of unpublished work which is being released by her longtime partner, Reed Duncan. Dewdney's last wish was, rather than having a funeral, that fans celebrate her life by reading to a child.

the original book, Llama Llama Red Pajama, as a rap. The books themselves were already extremely popular, having all been bestsellers and published in a number of languages and formats.

The series has been adapted by Netflix and Genius Brands International as an animated series of the same name beginning on January 26, 2018. The series is directed by Rob Minkoff, director of The Lion King (1994) as well as Saul Blinkoff of Doc McStuffins, with Joe Purdy of Dinosaur Train as showrunner. Jennifer Garner (Alias) is the voice of Mama Llama. The first trailer can be seen here

in November 2019. Somewhat unusually, despite the series being a Netflix Original, it has been released widely on a number of other platforms, including a number of DVD releases and for digital purchase.

Llama Llama's tantrum drives a child AND an adult to tears.

Llama Llama's tantrum drives a child AND an adult to tears.