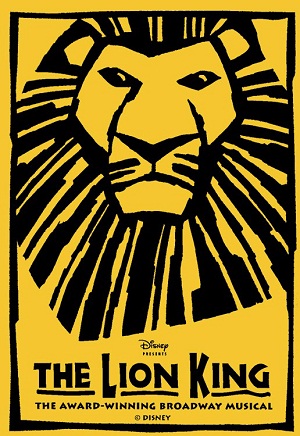 The success of Disney's The Lion King on the big screen resulted in a Screen-to-Stage Adaptation in 1997. Directed by Julie Taymor, the Broadway production is still running, having won the 1998 Best Musical Tony Award, and was the first such show to gross over $1 billion as of 2013. Touring and sit-down productions have been mounted in dozens of countries, and as of September 2014

its total $6.2 billion take has rendered it the single most successful entertainment venture of all time.

The show is famous for its Spectacle: While faithful to the film's story and songs, visually it eschews the relatively literal, film-based costumes and sets of Disney's previous Broadway adaptation Beauty and the Beast in favor of using a variety of creative methods to "animate" its characters and setting, with costumes that often cross over with puppetry. A different mixture of techniques is used for each animal species; the lions are actors in costumes that allow the audience to see their human expressions, the elephants are pantomime animals, the hornbill Zazu is a rod puppet, and so on.