Film / The Madness of King George 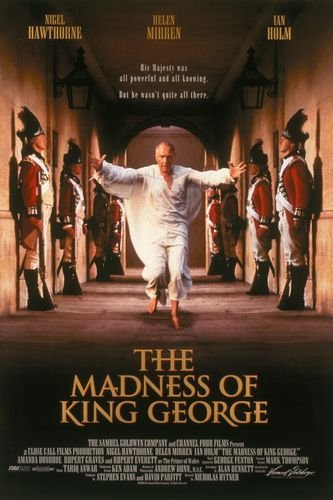 In late 1788, George III once again began showing signs of the mysterious mental illness that had first plagued him in the 1760s. Politicians, sensing the possibility of change, homed in for the kill. So, for that matter, did the king's much-disliked son and heir, the Prince of Wales. But in 1789, just as the Prince was on the verge of becoming Regent...the king made a miraculous (and mysterious) recovery.

A little over two centuries later, the playwright Alan Bennett turned this material into The Madness of George III (1991), which proved to be an international hit. Bennett and director Nicholas Hytner adapted it to film as The Madness of King George (1994); the film had a successful art house run and earned an Oscar nomination (not to mention some very belated recognition) for its star, Nigel Hawthorne. Helen Mirren was also nominated for an Oscar as "Best Actress in a Supporting Role", for her portrayal of Charlotte of Mecklenburg-Strelitz, George III's Queen consort.

Contemporary audiences noted some obvious similarities between the film's House of Hanover and the twentieth-century House of Windsor, especially when it came to frustrated Princes of Wales. However, the film is as much a response to King Lear as to modern royal foibles.