You Watch Too Much X 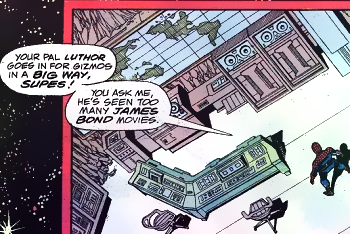 A Fourth Wall-affirming Stock Phrase said to the Genre Savvy after they point out what's about to happen. Advise your comrades against splitting up when the power goes out during a thunderstorm? "You watch too many horror movies." Suggest getting Locked in a Room gives you a great opportunity to resolve your differences? "You watch too much TV." Try to Logic Bomb the evil AI? "You read too many sci-fi novels." X is almost always the genre/medium of the work.

Similar to This Is Reality and Thinks Like a Romance Novel. Compare Not a Game, a Sister Trope expressing more anger. See also Fiction as Cover-Up. Compare I Know Mortal Kombat, when the character does have the skill the circumstance demands because he or she watched too much X.

Alternative Title(s): You Read Too Much X