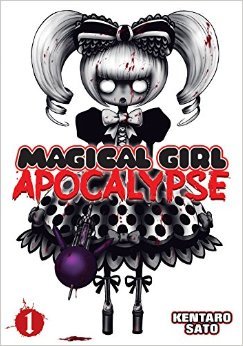 A horrifying combination of Blackest Night and Silent Hill coupled together with the Magical Girl Genre. Magical Girl Apocalypse (Mahou Shoujo of the End or Magical Girls of the End) is a horror manga by Sato Kentaro which ran in Shonen Champion from 2012 to 2017, and was compiled into 16 volumes. It was licensed in the US in 2014 by Seven Seas Entertainment.

The story revolves around Kii Kogami, who lives a dull high school life with his bullied childhood friend. One day, a strange-looking girl appears and kills nearly everyone in the school, turning their dead corpses into zombies. With a few survivors throughout the city, Kogami escapes the school as the Magical Girls and their undead minions take over the city.

Compare Puella Magi Madoka Magica and Elfen Lied for stories about as dark. The author, Sato Kentaro, has another manga, Magical Girl Site, which also ends up having ties to the Apocalypse universe.