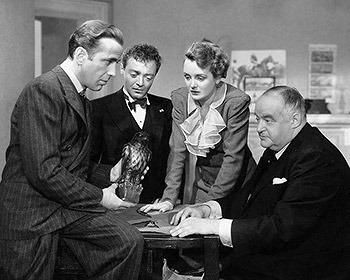 "The... uh... stuff that dreams are made of."
Advertisement:

The Maltese Falcon is a 1941 Warner Bros. Film Noir directed by John Huston and based on the novel of the same name by Dashiell Hammett. It stars Humphrey Bogart as Hardboiled Detective Sam Spade, Mary Astor as his Femme Fatale client, Sydney Greenstreet (in his film debut) as the sinister "fat man" Kasper Gutman, and Peter Lorre and Elisha Cook Jr. as Gutman's Ambiguously Gay sidekicks. The story concerns Spade's dealings with three unscrupulous adventurers who compete to obtain a fabulous jewel-encrusted statuette of a falcon.

The Maltese Falcon has been named as one of the greatest films of all time by Roger Ebert, and Entertainment Weekly, and was cited by Panorama du Film Noir Américain as the first major work of Film Noir. (Though today, movie historians generally consider the first noir to be Stranger on the Third Floor, released one year earlier.) The film was John Huston's directorial debut and was nominated for three Academy Awards.

Actually the third screen version of Hammett's novel, which had previously been filmed in 1931 as The Maltese Falcon and more loosely in 1936 as Satan Met a Lady.