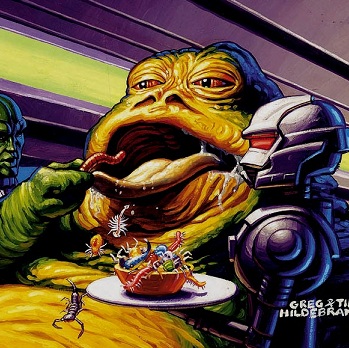 There are the villains who provoke moral outrage. Others are funny or even somewhat likeable. Some arouse carnal desires. A rare few inspire twisted admiration. And then, there's pure disgust. That's what this guy — and it's very commonly a guy — is for. He consumes. He devours. He gives nothing back. Meet: the Villainous Glutton.

The Villainous Glutton tends to run visually opposite to the Lean and Mean character. He will usually be a very bulky Fat Bastard, although not necessarily obese; his eating habits symbolize his Greed and lust for power, rarities, food, or whatever else he may be after. In some cases, some sort of powers may be the source of that bulk, too; alternately, the character may be muscular, but the drawing style will still usually result in a clearly "fat" look. While the Villainous Glutton is often played as an Evil Counterpart to the Big Eater, his consumption can be purely symbolic.

Typically Large and in Charge, and very prone to karmic Death by Gluttony.

Historically, this was a favorite charge of historians trying to tarnish the name of a political enemy. The Romans were particularly fond of the tactic; Emperor Caligula and Elagabalus got it particularly hard, although it probably had some basis in fact.

If the Villainous Glutton also eats in a way that's just plain disgusting, he's got Jabba Table Manners and is likely a Fat Slob; if his meal consists of endangered species or something similar, it may be an Exotic Entree. See also Adipose Rex (specifically for obese monarchs), Fat, Sweaty Southerner in a White Suit and Seven Deadly Sins. Contrast Fat Bastard (a character who really is fat and is a Jerkass, but may or may not be an actual villain) and Gonk (an anime trope usually played for a combination of Squick and Comic Relief).

Gluttony is one of the Seven Deadly Sins, characters as a giant monstrous demon prone to eating his own minions.

Gluttony is one of the Seven Deadly Sins, characters as a giant monstrous demon prone to eating his own minions.