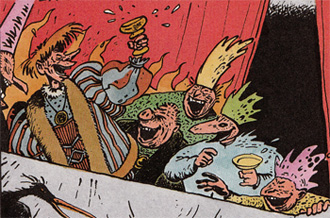 "A complex web of intrigue, in which death comes as poison, or a dagger in the night. That kind of murder is like a fine wine."
— Corkus, Berserk Abridged
Advertisement:

The court here is that group of not-so noble Nobles who hang around a king's corridors of power. They are dissolute, dissipated, degenerate, depraved — let's just sum it up as "decadent" — to such an extent that every thing they touch becomes corrupted. The country they are ruling is heading for doom while they play their spiteful little courtly games.

How the court got that way differs from story to story. More often than not, the source is at the top. They caught it from the monarch.

You see this court in a lot of stories, maybe even a majority of stories about courts. It is the go-to source for intrigue, backstabbing, and illicit affairs. And, face it, you'll need those things if there is going to be any fun at all.

This is a Sub-Trope to Standard Royal Court and Aristocrats Are Evil. When less than half of the court acts like this, something (or someone) else may be in play. See Evil Chancellor or Evil Prince for the possible cause. For a depraved court of law, try Kangaroo Court.