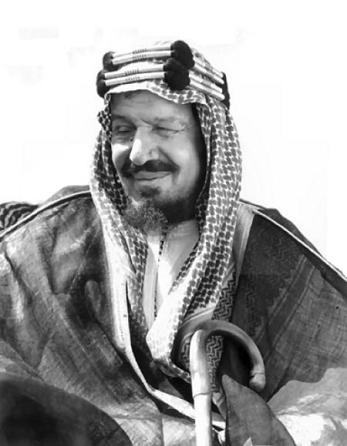 Given the smile on his face you can bet there's some Ottoman corpses out of frame.
"And we broke them and slaughtered of them three hundred and seventy men.
And God restored to us our kinsmen of the family of Saud that were prisoners in their hands
...And, by Almighty God, but two of the bedouin at our side were slain. Then we returned to the villages of our friends
And they had taken the castle and laid hold of the family of Yassim and those with them...
And our intention, by the Grace of God, is that we should speed to Buraida, if God wills. Thus far. Greeting."
— Translation of a battle dispatch by Ibn Saud, from The Desert King by David Howarth.
Advertisement:

Abdul Aziz Ibn Saud (15 January 1875 — 9 November 1953) lived in the turn of the 20th century. He was a successful Bedouin warlord who founded what is now Saudi Arabia. For a long time the Arabian Peninsula was in a three-way struggle for dominance among the Al-Rashid, the Hashemite, and the Al-Saud tribes. During his early life the Saudis were in exile, and the Rashidis held the upper hand. Ibn Saud, while little more than a boy, led a war party into the desert to seize the old capital city of Riyadh in a sudden coup. Such a yarn-worthy feat of arms made for splendid propaganda among the bedouin and he quickly had an army. He was able to fight his way to the top and become sultan of what is now Saudi Arabia.

Ibn Saud was a charismatic ruler of magnanimous but forceful disposition. He was successful in desert politics, and could hold his own when he later had to deal with Great Powers. He was respected by Sir Winston Churchill, among other notable people.

The information in this is from The Desert King by David Howarth, an entertaining and informative book but perhaps with an overly favorable bias.

Ibn Saud had several wives and fathered an unknown number of children well within the dozens, and his sons have in turn ruled over Saudi Arabia since his death in 1953. The current monarch, Salman, is the sixth of his children to reign. As late as 2015, it didn't look like power would pass to his grandsons anytime soon; Ibn Saud's youngest son, Muqrin, born in 1945, was named Crown Prince (first-in-line to the throne) in January 2015. However, that April, Muqrin was removed as Crown Prince and the position was given for the first time to one of the grandsons, namely Muhammad bin Nayef (born in 1959). He was in turn removed in June 2017 in favor of another grandson (and one of the current king's sons), Mohammad bin Salman (born 1985).