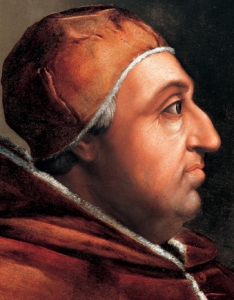 The Borgia Pope
"Flee, we are in the clutches of the wolf".
— Lorenzo de Medici upon Alexander VI's coronation. Possibly.
Advertisement:

Alexander VI (1 January 1431 – 18 August 1503), born Rodrigo Borgia, was The Pope from 1492 to 1503. His Papacy is quite infamous, for it is considered the height of the Catholic Church's debauchery during The Renaissance. His extravagances helped to trigger it as well as the Reformation shortly thereafter.

Borgia was born to an ancient and powerful family of nobles from Aragón (which would unite with Castile to form modern Spain when he was 48). At that time, the lands of the Crown of Aragón extended into Italy (including at that time Sardinia, Sicily, and the Kingdom of Naples—i.e. the southern third of the Italian "boot"). As a result, many Aragonese noble houses had relations with and holdings in Italy, and the Borgias were one of them. Young Rodrigo, being a bright lad but not actually a Borgia in the male line (and thus not in line to inherit much) was sent to the University of Bologna (the oldest in Europe, and then considered the best) to study law.

According to Catholic doctrine, priests, and especially Popes, are supposed to be Celibate Heroes by nature and default. Cardinal Rodrigo Borgia was neither. But what he lacked in holiness and piety, he made up for in cunning and shrewdness: After graduating from the University of Bologna with highest honors, he was made a priest (and subsequently a cardinal) by Calixtus III (his uncle). After Pope Innocent VIII died, he went on a meteoric rise in politics through all manner of bribery and corruption to buy off the entire Council of Cardinals to vote for him, (which was par for the course in that election). He succeeded.

What followed was a spectacle of unholiness: Pope Alexander VI acknowledged all of his children, made them the most powerful family of Italy, had several mistresses within the Vatican's walls, murdered several Italian nobles, bribed others, used his children to gain political advantage, and overall did everything a Pope's not supposed to do.

It is said both he and his son Cesare fell ill after a dinner, agonized in pain for some time, and while Cesare recovered, Rodrigo lacked the same luck and, after confessing to a priest, died. Historians differ on whether Pope Alexander VI simply fell ill, was poisoned (and if so, by whom), or if he was a victim of accidental food poisoning. It is said his corpse was a horrifying sight, bloated and deformed, barely fitting into the coffin, and rotting at a very fast pace (some of which has been chalked up to the summer heat). He was succeeded by Cardinal Francesco Piccolomini (Pope Pius III, whose pontificate lasted a mere 26 days), followed by Alexander's virulent arch-enemy, Cardinal Giuliano della Rovere (later Pope Julius II).

Historically, Pope Alexander VI also played a role in the colonization of the New World, by passing papal bulls that divided Portuguese and Spanish territorial discoveries and legitimized their conquest of indigenous land and settlements. In 1492, after Jews were expelled from Spain, 9,000 refugees were given permission by Pope Alexander VI to settle in Rome's Jewish quarter. In a period of nasty antisemitism, Pope Alexander VI declared that they were "permitted to lead their life, free from interference from Christians, to continue in their own rites, to gain wealth, and to enjoy many other privileges." He also allowed the immigration of Jews expelled from Portugal in 1497 and from Provence in 1498. And after complaints of Torquemada's extremist cruelty have reached the pope's ears, he had assigned assistant inquisistors just to keep Torquemada's extremism in check before being forced to retire to a convent.

Still, despite his many flaws, some modern historians have taken a kinder view upon his Papacy and have noted that, while he may not have been the most virtuous man, he was a great statesman who did a lot to strengthen the Church's position.