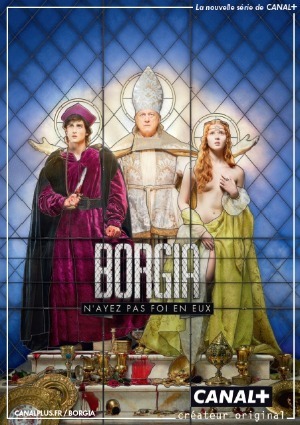 "Do not have faith in them."
I praise Borgia: Faith and Fear for what I call its "historicity" rather than its "accuracy." It takes its fair share of liberties, as well it should if it wants a modern person to sit through it. But it also succeeds in making the characters feel un-modern in a way many period pieces don't try to do. It is a bit alienating but much more powerful.
— Ada Palmer, "The Borgias" vs. "Borgia: Faith and Fear"

Borgia, also known as Borgia: Faith and Fear, is a 2011 StudioCanal and EOS Entertainment production based on the rise and fall of the Borgia family in renaissance Italy. The series had three seasons and aired in Italy, France, Austria, Germany and Belgium as well as US and UK Netflix.

In 1492 Italy is divided into warring states and at the centre lies Rome where the ageing Pope Innocent VIII rules. As Vice Chancellor of the College of Cardinals Rodrigo Borgia plans to use all his influence in order to become the next Pope and create a great dynasty. Following the death of his eldest son he summons his other children; Juan, Cesare and Lucrezia, back to the Rome. Soon all three are embroiled in the plotting of the noble families and the church and the series follows their development from pawns to skilled players of the game.

The series is notable for having at least two consecutive episodes directed by one director who then hands the series over to a new director, as well as for the variety of accents within the cast, a result of international casting.

Not to be confused with the 2011 Showtime series The Borgias (note the "the" and plural "s").

Cesare: You? You stabbed him nine times?