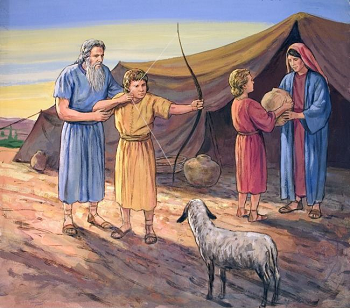 "The boys grew up, and Esau became a skillful hunter, a man of the open country, while Jacob was content to stay at home among the tents. Isaac, who had a taste for wild game, loved Esau, but Rebekah loved Jacob."
— Genesis 25:27-28, The Bible
Advertisement:

In a family of two or more children, each child has a stronger affinity for a different parent. There are two main ways this can happen:

These tend to go hand-in-hand, but not always. Sometimes, even when parents strive to be impartial, they still find that each child is more like one parent than the other. Conversely, taking after a parent is no guarantee of being that parent's favourite; it may even have the opposite effect.

May lead to accusations of Parental Favouritism, or to each child feeling like one parent's Unfavourite. Can lead to Sibling Rivalry and even Cain and Abel, particularly when the parents are at odds with each other. May contribute to Middle Child Syndrome if there are more than two children.

On the other hand, a family like this may be perfectly happy if each child is content to be one parent's favourite. And — as so often happens — the children may well be closer to each other than to either parent.

Alternative Title(s): His And Hers Kids