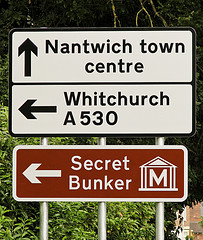 Top. Secret. note Yes, this is a real sign that leads to the Hack Green Secret Nuclear Bunker

, although it's not so secret anymore, as it's a museum now.
Suzuha: You're called the Future Gadget Laboratory, right?
Okabe: H-how do you know!? I don't remember telling you. Don't tell me, are you an Organization spy—!?
Suzuha: ...It was written on your mailbox.
— Steins;Gate
Advertisement:

This trope is when a particular piece of information is officially declared to be secret... but it is widely known by everyone anyway. The characters might as well not even attempt The Masquerade, because all the civilians around them know who they are and what they are up to. And that super-secret bit of gossip that no one can ever know? Hate to tell you this, but everyone knows it already. But at the core of the trope, is the fact that even though everyone is fully aware everyone else knows about the secret, it will still be treated as a secret; no one will ever openly admit to knowing it, and it is a common understanding that it should remain unspoken. Sometimes the occasional knowingly wink and nod will be shared, at most vague allusions or euphemisms might be used, but any and all open discussion and acknowledgment of the secret is completely out of the question. To do so will be viewed as a mild faux pas at best, and an outright cardinal sin at worst. As a result, the Naïve Newcomer or the Fish out of Water will often mistake it for an actual secret, as they don't know that most people already know. In smaller social circles, a common variant is "everyone knows, but they don't know how many other people know until they start comparing notes one day", at which point the real secret is that it isn't one.

Overt Operative is a Sub-Trope. Related to Not Cheating Unless You Get Caught, and commonly paired with Could Say It, But... Compare Everybody Knew Already, where someone genuinely believes their "secret" is actually secret right up until they tell everyone. The Transparent Closet is when the secret relates to sexuality. See also Everyone Can See It. Not to be confused with Public Secret Message, which is out in the open but not obvious in its existence.

Every time Truth asks others for Marinette's secret, they answer that she loves Adrien. As he lampshades, that's painfully obvious to everyone but Adrien.

Every time Truth asks others for Marinette's secret, they answer that she loves Adrien. As he lampshades, that's painfully obvious to everyone but Adrien.