Tabletop Game / Blades in the Dark 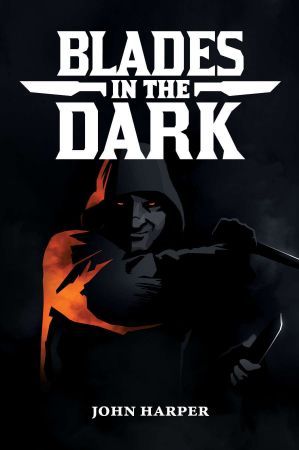 Greetings, Scoundrel
"You're in a haunted Victorian-era city trapped inside a wall of lightning powered by demon blood."
Advertisement:

Blades in the Dark is a Genre Blending fiction-first Tabletop RPG designed by John Harper (creator of Lady Blackbird) and published by one.seven design in early 2017, following a successful Kickstarter campaign back in 2015. In Blades, you play a gang of scoundrels eking out a living in the Vice City of Duskwall and trying to rise to the top of the criminal food chain by any means necessary.

Duskwall (or Doskvol, if that's your preference) is the primary setting of the game: a haunted, industrial port city on the northern shores of the mighty Akorosi Empire, formed by the survivors of the grand cataclysm that shattered the old world 850 years ago. No one knows what happened exactly, but the Sun went out, the ocean turned ink-black, and the old continents were torn asunder into a handful of Shattered Isles — most of which were then overrun by ravenous ghosts, as the spirits of the deceased stopped passing into the afterlife. The remnants of humanity built an industrial civilization over the ruins of old, eventually learning to keep the ghosts away from their cities with enormous lightning barriers powered by the blood of the eldritch leviathans from the Void Sea. Duskwall is one of these cities, and most of the blood harvested by leviathan hunters passes through here on its way to the rest of the Empire. As one may expect, the city has too much money, too much corruption, and too little law for its own good — in other words, it's just perfect for a band of ambitious scoundrels set to carve out their own little slice of hell.

(2013), which was set in the same world, but a few decades laternote in the year 891 of the Imperial Era, as opposed to Blades' 847, and put its players in the magnetic shoes of "line bulls" (Rail Jacks in Blades) protecting the electro-rail lines holding together the Imperium (Akorosi Empire) from ghosts and other rogue spirits.

and the 2016 Indie RPG Awards' Game of the Year

titles. It was also nominated for the Best Game and Product of the Year

at the Ennies 2018, but lost out to Zweihänder and only took Best Website

contains, among other things, an SRD for implementing original Blades hacks in other settings under the Forged in the Dark license.

On September 1, 2021, a Live-Action TV series based on the game was

to be produced by Warp Films (known for This Is England and its spinoff TV series).

The game and its setting contain examples of following tropes: