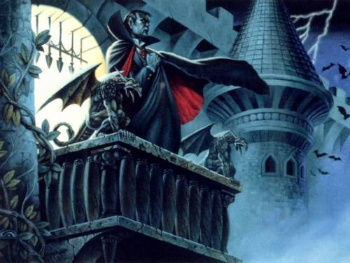 Gothic Horror is one of the oldest of the horror genres. Darker, edgier and on the Romanticism end of Romanticism Versus Enlightenment, it tends to play on both the thrill and the fear of the unknown, and places a great importance on atmosphere. It's usually heavily symbolic, sometimes even dreamlike. In addition to being important to the horror genre, the first scifi, fantasy, romance, mystery, and adventure authors drew inspiration from Gothic horror, so it's sometimes considered the parent of all modern genre fiction.

Gothic fiction is usually used as a synonym or is the name given to Gothic horror stories that are saturated with the above mentioned scifi, fantasy, romance, mystery, or adventure elements.

The name "Gothic" comes from a kind of architecture from The Middle Ages (christened as such by those who considered it barbaric in comparison to classical architecture, the name coming from the barbarian tribe of the Goths). There were a lot of Gothic ruins lying around Britain, and people in the 18th and 19th centuries developed an interest in them because (a) ruins are always kind of mysterious and melancholy and creepy and (b) they evoked the time period they were built in, which was thought of as a barbaric time where people believed in (and did) all kinds of weird stuff. For this reason, most early Gothic horror novels were set in that era. They were usually also set in Catholic countries, because the Brits who wrote them considered Catholicism sinister (yet also kinda cool).

The renewed interest in Gothic stuff also led to the Gothic Revival movement in architecture, but for the purposes of this article we're not so interested in that.

Horace Walpole's The Castle of Otranto, written in 1764, is considered the first Gothic horror novel. Walpole was a big fan of William Shakespeare and proudly declared that he borrowed most of the tropes from his idol's plays, particularly Hamlet, Macbeth, and Romeo and Juliet. Ann Radcliffe helped popularize the genre, and authors such as Matthew Lewis, Ludwig Flammenberg, Eliza Parsons, Eleanor Sleath, and Francis Lathom finished out the eighteenth century Gothic horror writers. The beginning of the nineteenth century saw Gothic horror being parodied by authors like Jane Austen, but there were still straight examples provided by authors such as Lord Byron and Mary Shelley. By the time the Victorian era rolled around Gothic horror was beginning to run out of steam, but there were still quite a few people writing it — in fact, most of the Gothic horror authors and works you've heard of probably come from this era, such as Edgar Allan Poe and the Brontë sisters. There were a few more notable Gothic authors in the early 20th century, but by the 1950s or so the genre had given way to modern Horror.

The Cosmic Horror Story is something of a Spiritual Successor to Gothic Horror, with the genre's codifier H. P. Lovecraft explicitly listing several masters of Gothic Horror as major influences. Where Gothic Horror drew upon classical mythology and legend to provide its nightmares, however, Cosmic Horror looked to the modern world itself, and pondered what would happen as man shone a light upon the last refuges of the creatures who once haunted the empty countryside now becoming suburbs, and reached beyond the limits of what he was meant to know. Perhaps Here There Be Dragons, after all?

Universal and Hammer Films are responsible for successfully adapting this genre onto the big screen. For modern takes on the genre see Gaslamp Fantasy, New Weird, and Supernatural Fiction. Compare/contrast also Gothic Punk.

For an in-depth look go to Violet Books

For a list of tropes used in the Gothic horror genre see Index of Gothic Horror Tropes. For advice on writing in this genre, see our Write a Gothic Story guide.

Authors who wrote partially or entirely in the Gothic fiction genre include:

Non-literary works of (and inspired by) Gothic horror