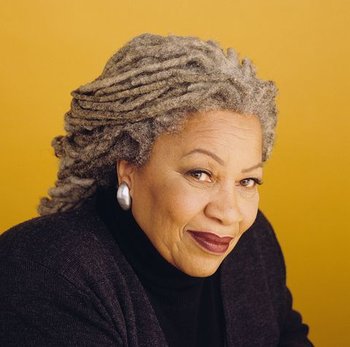 Toni Morrison (born Chloe Ardelia Wofford, February 18, 1931 – August 5, 2019) was a Nobel and Pulitzer Prize-winning American author, editor, and professor. She was born in Lorain, Ohio; her father was a welder, and her mother a domestic. This midwestern working-class background would come to inform the settings and characters of many of Morrison's works, especially early novels The Bluest Eye, Sula, and Song of Solomon.

Morrison's novels are noted for strong central themes of race, womanhood, and sexuality, as well as subtle explorations of postmodern feminist/womanist politics. Her fiction writing often involves rich character-based and multi-generational storytelling that takes place over sweeping historical periods. Much of her fiction is set in small African American communities in mid-western U.S. cities or the rural southern United States.

Her novels are known for being densely symbolic and full of metaphor, and her plots often feature many folkloric elements and archetypes. Several of her works, such as Song of Solomon and Beloved contain aspects of magical realism. Morrison is also noted for her fluid writing style, including heavy use of similes, as well as strategic variances in sentence structure and shifts in narrative perspective, and the inclusion of several distinct styles of dialogue, often within the same work.

She has also authored several non-fiction essays and works dealing with sociopolitical examinations of race and racialization in the United States. Most notably, her essay on the populism of Bill Clinton's 1992 election campaign led to him being regarded as "the first black president," despite him being white, because of just how closely his background of lower-class struggle resonated with the black community, demonstrating the oft-overlooked power of black America's voice that would become a more prominent point of focus with the passage of time.

Toni Morrison is widely regarded as one of the most influential voices in postmodern fiction, and her literary contributions have earned her several prestigious honors, including the 1988 Pulitzer Prize for fiction for her novel Beloved, and the Nobel Prize in Literature, which she received in 1993 for her entire body of work.

Works by this author include
Novels

Works by Toni Morrison with their own page include:

Other works by Toni Morrison contain examples of: