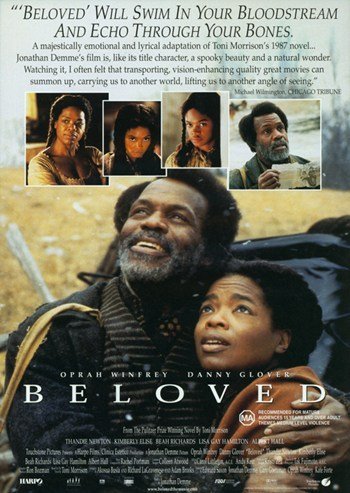 Beloved is a Pulitzer Prize-winning 1987 novel by Toni Morrison.

In 1873, during the aftermath of slavery and The American Civil War, a ghost haunts 124 Bluestone Road. Sethe and her youngest daughter Denver live with the ghost of a vengeful dead baby (Sethe's firstborn daughter) until the arrival of Paul D, an old acquaintance from Sethe's past days as a slave. After Paul D chases away the spirit and situates himself into their lives, it appears as though Sethe finally has a chance at stability and happiness. However, this changes when a beautiful young woman in a pretty hat emerges from nowhere and magicks her way into 124.

Beloved is not your typical ghost story. It is, however, a complex character study filled to the brim with tragedy, examinations of horrific historical injustices, the pain caused by slavery, the bonds between mothers and daughters, and Mind Screws of epic proportions.

Was cited as one of the books instrumental in Morrison winning the Nobel Prize in Literature in 1993.

It was made into a film in 1998, directed by Jonathan Demme and starring Oprah Winfrey and Danny Glover.

The novel and the movie provide examples of: