Film / One Day in September 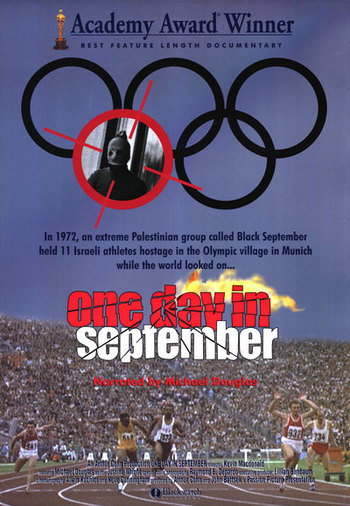 One Day in September is a 1999 documentary feature directed by Kevin Macdonald.

It is about the infamous 1972 Munich massacre

at the Olympic Games. A Palestinian terrorist group that called itself "Black September" snuck into the athete's village and seized 11 members of the Israeli Olympic delegation as hostages. The terrorists demanded the release of 234 terrorists being held prisoner by the Israelis and the West Germans, but the Israelis refused to negotiate. During the prolonged crisis, two Israelis are killed. Finally, an attempt by the terrorists to take a plane to Egypt along with their hostages is interrupted by a rescue attempt at the airport. Unfortunately, the West German police horribly botch the rescue attempt and the remaining nine hostages are killed, along with five of the eight terrorists.

For a fictional rendition of these events and the subsequent Israeli attempts at vengeance, see the Steven Spielberg film Munich.