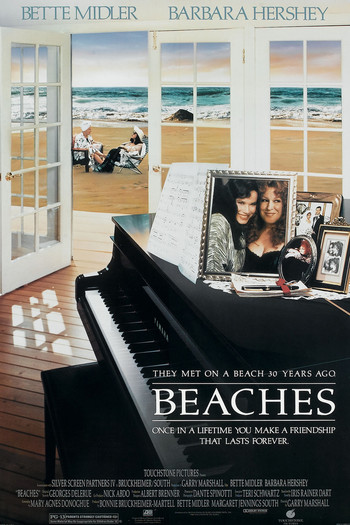 Beaches is a 1988 Chick Flick directed by Garry Marshall, starring Bette Midler and Barbara Hershey, loosely based off of the 1985 novel by Iris R. Dart.

The film depicts the friendship of two girls, Cecelia "CC" Bloom (Midler) and Hillary Whitney (Hershey), from very different backgrounds and different parts of the country. When they grow up we see this friendship go through many ups and downs the course of their lives.

Was remade in 2017 by the Lifetime cable network, with Idina Menzel and Nia Long starring.

This film shows examples of the following tropes: