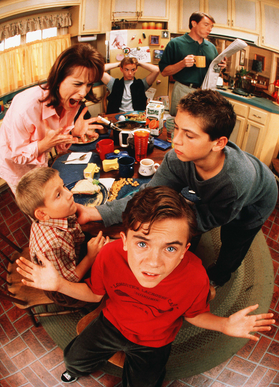 "This is why I'm going gray at 15!"
"All happy families are like one another; each unhappy family is unhappy in its own way."
— Leo Tolstoy, Anna Karenina
Advertisement:

The entire premise for many Dom Coms is that the lead characters are a family of maladjusted people who generally don't get along. Usually they consist of a Jaded Washout and/or Bumbling Dad father, a mother who is either a paragon of common sense and efficiency or a repulsive harridan (or both, a la Roseanne), and two-four kids who are unhappy, dislike each other, and resent at least one of their parents. Also, the father and his mother-in-law tend to hate each other. The family is generally fairly poor, although not always — Arrested Development is about a large, rich dysfunctional family. And even they won't remain wealthy. (It was seized by the government.)

Don't get them wrong, though; for all the family arguments, the typical dysfunctional family never engages in actual abusive behavior — any that did would immediately lose all audience sympathy. Furthermore, when the family is facing a major problem from outside, they will generally pull together to face it. Dysfunctional Families may not get along, but they rarely actually loathe each other, and often receive Aw, Look! They Really Do Love Each Other moments.

In American comedies, this was originally a subversion of the Leave It to Beaver/The Brady Bunch almost-too-good-to-believe family, but eventually ballooned into a genre of its own. The Dysfunctional Family has been a British comedy staple since the 1950s.

Contrast with Quirky Household, where the people are merely weird, but generally happy — indeed, more happy than more conventional households. If a family member makes friends who they understandably prefer to the family, they'll probably mutter that Friends Are Chosen, Family Aren't.

See also Big, Screwed-Up Family, who are more numerous, even more dysfunctional, and not (usually) Played for Laughs.