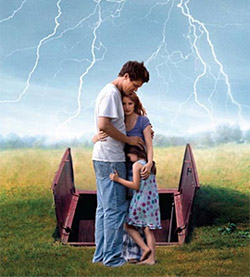 "You think I'm crazy? Well, listen up: there's a storm coming like nothing you've ever seen, and not a one of you is prepared for it."
— Curtis LaForche
Advertisement:

A construction worker in Elyria, Ohio named Curtis LaForche begins having apocalyptic dreams about a terrible storm. At first dismissing them as being from stress, Curtis soon can't ignore them anymore as the dreams become more and more intense, causing him to act erratically in real life. Worried about the welfare of his family, Curtis begins a paranoid project of expanding the storm shelter in his backyard.

However, it's revealed that Curtis's mother is schizophrenic. Realizing that he might be manifesting symptoms of her disease, he starts seeing doctors about possibly entering treatment. Torn between an unshakeable conviction that something terrible is about to happen, and the fear that he might be going crazy, Curtis's life begins to fall apart.