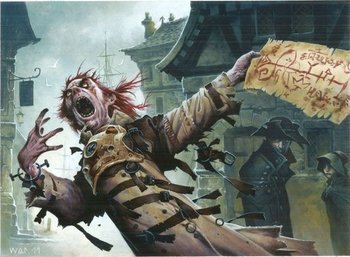 at work.
And if I make no sense to you,
Well, I make no sense to me!
The dreams I have are sticky as dreams
That leave trails of words
That will mean churches' fall!
— Current 93, "Black Ships Were Sinking Into Idumaea"
Advertisement:

The good news about this character is that they can see the future. The bad news is that it turns out that seeing the future is not good for your mental health. Perhaps it's the stress of breaking through the boundaries of time, perhaps it's the strain of seeing so much all at once, possibly including alternative futures. It could be that now they can see the future, the concepts of time and causality don't make sense any more. Maybe they can't handle seeing the truly Bad Future awaiting them. Or it could be that they are only able to see the future because they are mad, writers often don't distinguish. Either way what we have here is easily one of the most useful and irritating types of Seer. Work out what they mean and you have genuine cast iron visions, get confused or ignore it and you will find it coming back to bite you.

They tend to speak entirely in metaphor, riddles, vagueries, and oblique poetry.

A partial inverse of With Great Power Comes Great Insanity, related to Go Mad from the Revelation, Poke in the Third Eye and Prescience Is Predictable. Compare The Schizophrenia Conspiracy, Infallible Babble, His Name Is....

Compare also The Cassandra, when a character doesn't get mad from predicting the future, but still gets ignored, and sometimes considered as mad by others, because he can predict the future.