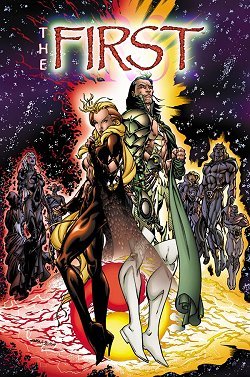 The First is a Comic Book published by CrossGen Comics and written by Barbara Kesel.
Advertisement:

The titular First are a race of powerful deities who reside on the planet Elysia. Years ago, they warred with one another until their leader, Altwaal, separated Elysia into two Houses, House Dexter (those who put the needs of others before their own) and House Sinister (those who put their own ambitions before the concerns of others), before disappearing for parts unknown. Now, the discovery that certain individuals (Sigil-Bearers) on many other worlds are being bestowed the power to potentially kill their kind is sending panic through the First's ranks.

Persha, a Secundae (offspring of two original First) of House Sinister which is ruled by her mother Ingra, embarks on a quest to find Altwaal hoping that he can return to Elysia and unite the First against the Sigil-Bearers. Seahn, a Secundae of House Dexter, plots to replace Pyrem as leader of House Dexter. Gannish, a First of House Sinister, heads off to investigate the mystery of the Sigil-Bearers and ultimately uncovers a startling revelation about his fellow First. And Ingra seizes the opportunity to claim all of Elysia as hers...

The First ran for 37 issues and was collected in six volumes, three of which were never published:

Issue #6 of CrossGen Chronicles serves as a prequel to the main story, detailing Pyrem's rise to leadership of House Dexter as well as the births of Persha and Seahn.

The First contains examples of the following tropes: