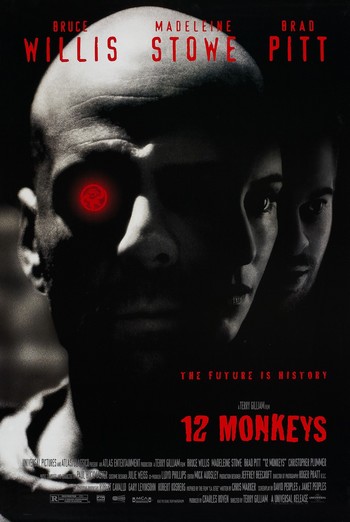 "...Five billion people will die from a deadly virus in 1997... The survivors will abandon the surface of the planet... Once again the animals will rule the world..."
— Excerpts from interview with clinically diagnosed paranoid schizophrenic, April 12, 1990, Baltimore County Hospital
Advertisement:

12 Monkeys is a 1995 science fiction film directed by Terry Gilliam and written by David and Janet Peoples. It is based on the famous French experimental short film La Jetée. It stars Bruce Willis, Madeleine Stowe, and Brad Pitt, who won a Golden Globe Award for Best Supporting Actor and was nominated for an Academy Award in the same category.

There is a chance that asylum patient James Cole (Willis) is not insane. That he might really be a time traveler from a post-apocalyptic future. That the Army of the Twelve Monkeys, and the deadly virus he claims they plan to release, are all real. The only trouble is, if Dr. Kathryn Railly (Stowe) accepts this, she will have to accept an even more terrifying truth: that The End of the World as We Know It is coming, and soon.

The film was adapted into a television series for Syfy, which premiered in January 2015.