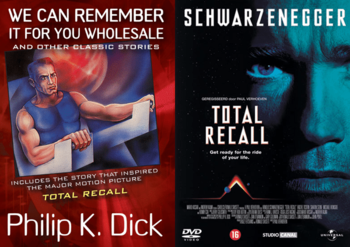 In some cases, the name change eclipses the source so much that it has to get a trend cover down the road so people know what it is.
"'Edge of Tomorrow' but really 'All You Need is Kill', and it's like, why change the title like that, you know?"
— Josh, The Magicians
Advertisement:

When an adaptation of a work has a different title from the source material. This often happens because the original title was deemed unsuitable for the medium it was adapted into – a title that sounds fine for a book may sound awkward for a film, and possibly difficult to understand if the original work has a premise that may not be familiar to mainstream audiences. The title may also be changed because it sounded too similar to an unrelated work. Or perhaps the producers simply wanted a better name.

Depending on how different the title and/or the story are, this can lead the work to be seen less as an adaptation and more as a work influenced by the original, since now the title can't tie the two together. Taken to the extreme, the work ends up as a Divorced Installment, erasing all association with whatever it was based on.

A Market-Based Title, where the name is changed in international versions, may involve this, or it may reverse the trope and use the original work's title. This depends on how well the original story is known abroad.

Adaptation Displacement is a very frequent symptom of this trope if the original story is unknown to a wider audience.

See also Adaptation Name Change (when something in-story has its name changed), Appropriated Title (when a franchise that began with a work of a particular title is better known by the name of a later installment in said franchise) and compare In Name Only (when the name is (usually) kept, but most or all of the content is different).