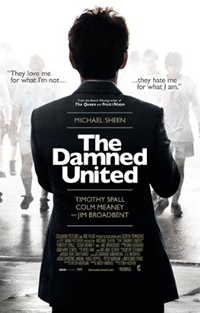 Oh, yes, you're the shop window, I grant you that. The razzle and the bloody dazzle. But I'm the goods in the back! Without me, without somebody to save you from yourself, Brian fucking Clough, you're not just half. You're nothing!
-Peter Taylor

The Damned Utd is a book written by David Peace, later adapted into a 2009 movie named The Damned United directed by Tom Hooper and starring Michael Sheen. The main character is the famous British football manager Brian Clough. The account is a blend of fact, fiction and rumour, and simultaneously tells two different stories from Clough's career:

Both book and film end with Clough being sacked by Leeds and (in the earlier timeline) being appointed Leeds manager. The film's epilogue notes that Clough and Taylor were reunited at Nottingham Forest, and led the club to even greater heights than Derby.

One interesting aspect of both the book and the movie is that it's a rare sport story that subverts/averts/ignores pretty much all the traditional Sports Story Tropes we're so used to: there is no Big Game and the games don't come Down to the Last Play, the underdogs can and will lose, and the Opposing Sports Team isn't even a villain! As Roger Ebert summarizes in his review of the movie: "The Damned United avoids all sports movie cliches, even the obligatory ending where the team comes from behind. Is this the first sports movie where the hero comes from ahead and loses?"