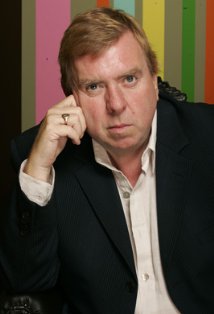 "It doesn't bother me one iota that most of my career has been playing people who are not that - well, let's say that people wouldn't aspire to be like them."
Advertisement:

He first came to prominence playing boring electrician Barry in the successful 1980s comedy-drama series Auf Wiedersehen, Pet. He has since appeared in numerous films, and is perhaps best known for playing what most consider repulsive characters, or otherwise, a Gonk. These include Peter Pettigrew from the Harry Potter films, Beadle Bamford in Sweeney Todd: The Demon Barber of Fleet Street, Mr. Poe in A Series of Unfortunate Events and Nathaniel from Disney's Enchanted. In Shooting The Past, he played Oswald Bates, a bizarre genius who is more like Bunny-Ears Lawyer. He played Winston Churchill in The King's Speech, and Simon Graham in The Last Samurai. In the film adaptation of Journey's End, he played Lt. Trotter.

He won Best Actor at Cannes for his portrayal of JMW Turner in the biopic Mr. Turner.

As for his personal life, Spall has been married since 1981 and has three children, the youngest of whom, Rafe, is also an actor; they appeared together as father and son in the 2007 television adaptation of A Room with a View.